Select one of Maya's series to jump down to their respective sections, or just continue scrolling down to see it all.

Stay tuned to this page to find insider info, videos, ecards and other exclusive extras. Don't forget to share them with your friends, too!

About the KGI Series

The Kelly/KGI Series centers around a military family. There are six Kelly brothers, all of whom served in different branches of the military. When the idea for this series came to me, the first question that always pops into my mind is where? For me this answer was immediate. I lived in Paris, Tennessee for several years and spent many a day on Kentucky Lake and in the Dover area. For me, it was the perfect place to base the stories.

The Kellys are a lot of fun to write. They’re loyal, hard working, fiercely competitive and family is the most important thing in their lives. Marlene Kelly is the matriarch of the large family and has a penchant for collecting “strays” as her sons tease her endlessly over. Over the years she’s added “adopted” family members to the fold and she incessantly mothers them all. Her most recent addition to the Kelly clan has her sons up in arms, but Marlene didn’t raise six rambunctious sons by being a wimp!

The first book in the series, The Darkest Hour, finds the Kelly family in turmoil after the death of Ethan Kelly’s wife a year before. Rachel was much beloved by all the Kellys and Ethan hides a dark secret about the state of his marriage before her fateful mercy mission to South America—the one she never came back from. Now on the one year anniversary of her death, he receives startling information. She’s alive.

Garrett Kelly: Second oldest, known as the hardass. “Biggest” of the Kelly brothers. Served in the Marines. Black short cut hair with blue eyes. (For more information on Garrett Kelly, check out Hidden Away, KGI book #3)

Donovan Kelly: Third oldest. Smallest in stature/build of the Kelly brothers. Green eyes. Lighter hair like Sam’s. Quieter. Has huge soft spot for women and children. Won’t turn down a mission where either is involved. Served in the Marines. Considered the resident tech geek. Has love affair with “Hoss” the KGI computer.

Ethan Kelly: Fourth oldest. Black hair, blue eyes. Strongly resembles Garrett. Former Navy SEAL. Resigned his commission when his wife, Rachel, miscarried. Their marriage struggled and he asked for a divorce right before Rachel left on a mercy mission to South America that she never returned from. For a year he struggled with his guilt and the fact that he made the worst mistake of his life in pushing her away. On the one year anniversary of Rachel’s death, he receives word that she isn’t dead at all and he and his brothers lead a mission to rescue her (For more information on Ethan Kelly, check out The Darkest Hour, KGI book #1)

Joe Kelly: Fifth oldest and is a twin to Nathan, serves in the U.S. Army, Dark brown hair and eyes. Is the less serious of his brothers. He and Nathan are close but will have their relationship tested when Nathan returns home after a period of captivity.

Nathan Kelly: Youngest Kelly brother and is Joe’s twin, though they aren’t identical. Quieter, more like Donovan in personality. More serious than his twin. Dark hair, brown eyes. Served with his twin in the U.S Army. Just before he and Joe were due to be released from active duty, he’s captured and spends several hellish weeks in captivity. (For more information on Nathan Kelly, check out Whispers in the Dark, KGI book #4)

Frank Kelly: The Kelly family patriarch. Has lived and worked in the Dover/Paris Tennessee area his entire life. Owns a hardware store and has instilled core values of honor and responsibility to all his boys.

Marlene Kelly: The Kelly family matriarch and very much the heart and soul of the Kelly clan. She’s made a lifetime habit of collecting strays and adopting them into the Kelly fold. She’s a retired school teacher and has no compunction about ruthlessly ordering her sons about so they are where she wants them when she wants them.

Rusty: A troubled teen who is taken in by Marlene in The Darkest Hour. She’s struggled to find her place in the Kelly family but is gradually earning acceptance and the respect of others despite a few missteps along the way.

Sean Cameron: Another of Marlene’s “strays” that she’s dragged into the Kelly family. He was born and raised in Louisiana but works as a sheriff’s deputy in Stewart County, Tennessee and is often involved and helps the Kellys in tough situations.

Rio: heads one of the KGI teams consisting of Terrence, Diego, Decker, Alton and Browning. Much isn’t known of his past. He worked black ops, didn’t officially exist. His real name isn’t known to his teammates or even to KGI. He was nicknamed for his birth city of Rio de Janeiro. His father was American. His mother Brazilllian. He’s still troubled over the death of his sister at the hands of a man she trusted. He came highly recommended to Sam and has worked with KGI since walking away from his former life. He and his men are loaners and go their own way. (For more information on Rio, check out Echoes at Dawn, KGI book #5)

Steele: heads the ther KGI team consisting of P.J. Rutherford, former female member of a S.W.A.T. team, David Coletrain (Cole) former Navy SEAL, Dolphin, nicknamed so for his affinity for water, Renshaw and Baker. Steele is ruthless, ice cold, often called a machine by his teammates and KGI. He operated on no emotion, has never been witnessed expressing emotion. He’s hard, tough and expects nothing less than 110 percent from his team. His orders aren’t questioned and he has the respect of everyone who works with him or for him.

Here is the link to Top Shot, a show I enjoy that’s all about guns and blowing up shit along with a lot of military and ex military dudes *g*

Check out this great graphic for Highlander Most Wanted! It was made by Ruth AKA UniquelyMoi on Goodreads. 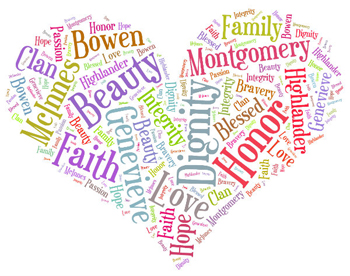 In 2011, a member of the romance novel community lost her husband, leaving her alone with four children. A special eBay auction was set up to raise money to help the family through this tragedy, with authors, bloggers, editors, and agents donating items for others to bid on. Maya’s bid won a custom book video from Tessa Dare.

Last year, I'd made an amateur book video using my kids' toys. People seemed to enjoy it. So when Operation Auction happened, I offered up a similar video as an auction item. To sweeten the deal, a lot of bloggers also promised to post the winner's video. Maya made a VERY generous bid to win it, and I could not have been more thrilled. Making a video for her Highlander trilogy was a dream come true. Who could resist the chance to dress up Ken dolls in kilts?

So the video is completely amateur, made with stock music, low-low-budget special effects, my iPhone & macbook, and of course, all the crazy stuff in my children's room. Enticed By His Forgotten Lover ecard!

To commemorate the release of her Pregnancy and Passion series, Maya has posted a special Harlequin ecard for Book 1, Enticed by His Forgotten Lover!

Click on the image on the right to download a PDF of the ecard (will open in a new window) and be sure to share it with your friends! Wanted By Her Lost Love ecard!

A special ecard for Book 2 in the Pregnancy and Passion series, Wanted By Her Lost Love! Tempted By Her Innocent Kiss ecard!

To commemorate the release of her Pregnancy and Passion series, Maya has posted a special Harlequin ecard for Book 3, Tempted By Her Innocent Kiss!

Click on the image on the right to download a PDF of the ecard (will open in a new window) and be sure to share it with your friends!