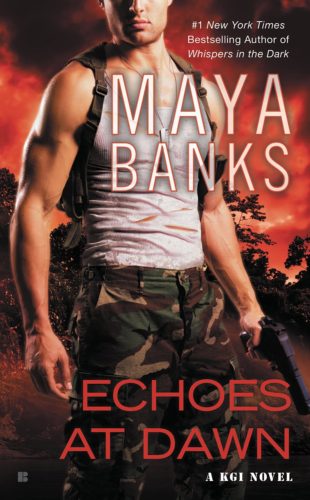 Book 5 in the KGI Series 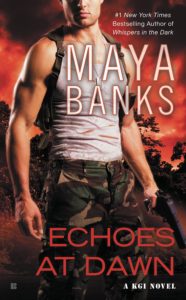 “She’s a mess,” Diego said grimly. “I’ve reset her arm. Her respirations are shallow and her breath sounds aren’t good over her right lung. She’s dehydrated, run down, and there’s no way in hell she’s going to make it off this mountain unless we carry her. She’s done.”

“I can’t believe she made it this far,” Terrence muttered.

The two men hunched over Grace as she lay on the ground. Diego had given her a thorough examination and his face said it all. She was in a bad way.

“I don’t know how the hell she’s survived,” Diego said as he rose. “She’s a walking corpse.”

Rio scowled fiercely at his medic and third in command. He didn’t want to hear anything derogatory about Grace. She had more resilience and fight in her than most of the men he’d served with in his years in black ops. His money would be on her any damn day of the week.

“What are our transport options?” Rio demanded.

Rio blew out his breath. “That’s it?”

Yeah, they had. Only they hadn’t been carrying a woman who was more dead than alive. A woman who needed gentleness and caring, not a bumpy-ass ride down switchbacks in the bed of a farm truck.

“How the fuck would you know anything about the Ritz?” Alton grumbled. “Fucking pretty boy.”

Browning snorted. “You’ve got me mixed up with Diego here. He’s Mr. Suave and shit.”

Rio held up his hands. “We’ve left bodies all over this goddamn mountain. We’ve got to pony up and get the hell out of here. I’m going to try and raise Sam again.”

Terrence slapped his hand to his pocket as if remembering something. “You have a message from Steele. Must be important. It came in code.”

Rio frowned and reached for the handheld unit Terrence pulled from his pocket. He punched in his access code and scanned the tersely worded message.

Resnick involved. Watch your six. Don’t know extent. Don’t trust him. Unsure of KGI status with him. Took Shea. Has history with both Peterson sisters.

Jesus H. Christ. If this didn’t complicate matters. Steele was a cryptic bastard on his best day. What the hell was Rio supposed to do with this?

Rio wasn’t one to give his trust to anyone. He respected Sam and the other Kellys. He wouldn’t work for them unless there was a level of trust there. But he never went so far as to make himself vulnerable to anyone. KGI included.

Now, if Steele’s message was interpreted correctly, Steele was effectively giving the other team leader a heads-up that all may not be well within the KGI ranks and that Resnick was a snake in the grass.

It didn’t change that Rio still had to contact Sam, but it made him a whole lot more leery of handing over information on a woman helpless to defend herself.

He’d already decided his course of action anyway, and it didn’t include hauling Grace back to Tennessee. Especially now that Steele had warned him. His gut had already given him a heads-up, and now he knew it was legit.

“Let’s roll,” Rio said in a grim voice. “Where’s this chariot you arranged for us, T?”

Terrence’s teeth flashed and he tossed his head to the west. “Quarter mile. Stashed in an aspen grove.”

Rio knelt beside Grace and put his hand on her cheek. She didn’t even stir. His gaze moved down her body, taking in her tattered clothing, the mix of blood and bruises, the makeshift splint on her bruised and swollen arm.

“One more time, Grace,” Rio whispered. “One more trip. We’ll get you out of here. I swear it.”

“She needs to remain flat as possible,” Diego said. “I’m worried she’s already punctured a lung. I don’t like her color and I don’t like her respirations. They’re becoming more labored all the time. If we aren’t careful, we could end up doing her more harm.”

“If we don’t move her, she’s going to be dead,” Rio said bluntly.

Rio waved off his men. He was taking responsibility for Grace. It was he who’d promised her he’d get her out of this alive. It was he who’d pushed her, bullied her and demanded that she give what she couldn’t spare. He alone would carry her.

As gently as possible, he slid his arms underneath her body and lifted, rising to his full height, bearing her weight with him. He cradled her against his chest and then fixed his gaze on Terrence.

“I’m depending on you to get us out of here.”

Terrence nodded and then motioned for the men to take position around Rio and Grace. Guns up and ready, they moved as one, taking a fast clip in the direction of the waiting truck.

The sun had just peeked over the horizon, a burnt orange glow lighting a pink sky, when they reached the grove of aspens where the truck was parked.

Rio grimaced. Terrence hadn’t lied when he said it was a work truck. But as long as it got them the hell down the road, it would do.

As they neared the vehicle, movement caught Rio’s attention. He dropped like a rock, instinctively positioning himself over Grace. His men reacted, forming a barrier between Rio and the potential danger.

“Don’t shoot. I have business with Rio.”

The words reached Rio’s ears, and every hair on his nape prickled with apprehension. He eased Grace onto the ground and then jerked a thumb at Diego. Diego dropped to hover over Grace while Rio rose, his gun up, pointed at the man in the distance.

“What the fuck are you doing here, Hancock?”

This was bad. Worse than bad. Hancock being here in these mountains could only mean one thing. Titan was after Grace or at the very least had been sent to recover her. 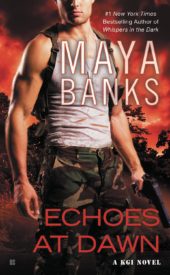 Echoes at Dawn in Other Languages:

is Book 5 in the KGI Series