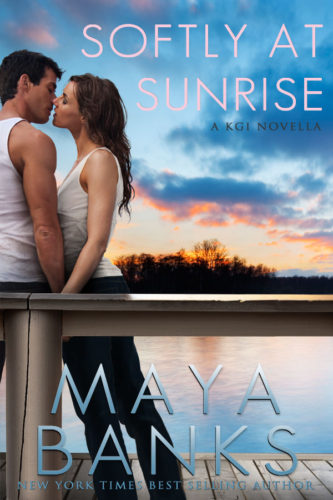 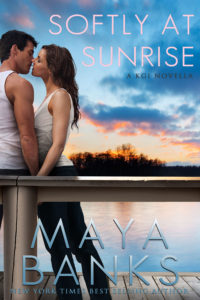 Rachel Kelly stared back at her reflection and then heaved a sigh before taking her hair down from the loose bun she’d fashioned. She brushed out the long strands and let them fall over her shoulders.

She was overthinking this too much, and if she couldn’t get it together, Ethan would never let her out of the house. He was already worried over the fact that she was returning to work. If he had his way, she’d remain at home, cocooned in his and his family’s embrace.

She understood his concern, and she loved him dearly for it. But it was time to move on with her life—a life that she’d once thought was over. After being officially “dead” for an entire year only to be resurrected when her husband and his brothers’ special ops group, KGI, rescued her from imprisonment, she was ready to live fully again.

For the last couple of years, she’d tiptoed through life, as if she were afraid to take any risks at all. She’d surrounded herself with family—and it was ever growing with new additions as more of the brothers and team members married—and had contented herself with complacency.

New house. New start. She was young and had her entire life ahead of her, even if she’d taken that life for granted in the past. She’d never do it again. Every day was precious, and she was grateful for every minute with her husband and her family.

She smoothed a hand over her flat belly, a flutter of nervousness welling up from within. Excitement over her dreams of the future. Of the possibilities that could even now be realized. It was hard to be calm and tell herself the unlikelihood of it happening so quickly.

She and Ethan—after long and careful consideration—had decided that she’d go off birth control a few months earlier. They hadn’t even confided in family…yet. Ethan had been reluctant, and it had taken convincing on her part for him to agree. Not because he didn’t want a child, but because he worried for her.

Once before, seemingly a lifetime ago, she’d been pregnant and had miscarried while Ethan was away with his SEAL team on a mission. That event had been the catalyst for so many things. Ethan had walked away, resigning his commission in the Navy because he’d felt guilty that he wasn’t there when she needed him.

The decision had made him desperately unhappy, and it had strained their relationship to the breaking point. She’d known things were bad, but she hadn’t known just how bad until right before she’d left on a mercy mission with other teachers to South America. Ethan had presented her with divorce papers, looked her in the eye, and told her he was ready to end their marriage.

She closed her eyes, because even now, so many years later, it had the power to gut her.

And then she’d left for South America and hadn’t returned until a year later when Ethan and his brothers had come for her.

It had been a new chance, a fresh start, one more opportunity for them to make things right. And they had.

She knew there was no guarantee after all she’d endured that she could even get pregnant, and if she did manage it, she could very well miscarry again. It could take them months or even years to conceive, which was why she’d wanted to go off her birth control now.

But the thread of hope was there. Alive and burning inside her. She had only to look at her niece, Charlotte, and she was filled with fierce yearning for her own child.

Ethan appeared in the door, and he stared intently at her with those piercing blue eyes.

“Are you sure you want to do this, baby?”

She smiled, warmed by his concern and the love she could see burning in his gaze.

“I’m only substituting for now. It’ll be a good test run. If I hold up well, then maybe I’ll consider going back full time next year if a position is open.”

Wordlessly, he stepped forward and pulled her into his arms. He was damp with sweat from his morning run. He got up every morning for his workout regimen that he did on his own, but he also trained with his brothers at the KGI facility. The compound where she and Ethan would be moving to in just a few days.

She inhaled his scent, the muskiness of sweat and the faint hint of soap from his earlier shower. Hugs were something else she never took for granted. During her captivity, something as simple as human touch had been a craving that had been as crippling as the torture she’d endured.

He kissed the top of her head and gave her an extra squeeze.

“Call me if you have any problems.”

“Is your cell charged?”

Her smile grew bigger. She was forever forgetting to charge the damn thing. It frustrated Ethan to no end not to be able to get in touch with her. They both still battled their demons in different ways. His fear was of losing her again, and he liked to know where she was at all times. He checked in frequently with her and worried endlessly if he couldn’t reach her.

It might annoy some women, but Rachel understood his need for reassurance. He wasn’t controlling. He was scared to death. There was a huge difference.

“It’s charged, but don’t call me during class,” she scolded lightly. “I left my schedule on the fridge so you’ll know what time my classes are. I’ll text you when I can.”

Ethan sighed and slowly released her. “I know I’m an overbearing bastard. I can’t help myself. If I had my way, you would never go back to work, but I want you to be happy, so if this does it, then I’m okay with it. I’ll deal. I promise.”

“I love you,” she said, moving back into his arms. “Remember that, okay?”

He lowered his mouth to hers in a heated rush of lips and tongue. “I love you too,” he said in that low, growly voice that always sent shivers down her spine. “Be careful and text me when you get there so I know you made it safe.”

She rolled her eyes and withdrew, checking her appearance in the mirror one last time. “I’ll be fine. And don’t forget. Your mom and Rusty are coming over tonight to help box up some stuff. Rusty’s home for the weekend, and she’s volunteered her services.”

“I won’t be late,” Ethan promised. “Light training day today. Working with the new recruits for Nathan and Joe’s team.”

Rachel’s lips turned down into an unhappy frown. “Have you heard anything from P.J. yet?”

Ethan went quiet and then shook his head. “Not a damn thing since she bugged out. It’s killing Cole. Steele’s not taking it very well either. The team isn’t the same without her, and Steele refuses to replace her.”

“Good,” Rachel said fiercely. “She just needs time. She’ll be back. I know she will.”

Rachel sighed and slid past Ethan into the bedroom so she could get her shoes. P.J. Rutherford was the only female KGI member. Well, no, that wasn’t right anymore. Skylar Watkins was a new recruit, but Rachel didn’t know her well. She’d only met her once.

Things had gone terribly wrong for P.J. on a mission, and she’d walked away in the emotional aftermath. Rachel’s heart ached for the other woman because she knew how it was to feel like you’d lost a huge part of yourself. To be at loose ends.

“Okay, wish me luck,” she announced after she’d slipped on the low heels and picked up her briefcase.

“You’ll be awesome,” Ethan said, pride evident in his voice. “You were a damn good teacher before. Mom was so proud of you. She was over the moon when you followed in her footsteps. All you did was take a little time off. It’ll come back to you in a flash. The kids will love you, just like they all did before.”

She went into his arms for another hug. “Thank you. I needed that this morning.”

He squeezed her hard and then reluctantly let her go.

“I’m going to jump in the shower again and then head over to the compound. I’ll talk to you soon.”

Rachel watched as he disappeared into the bathroom, and then she squared her shoulders and walked out of the bedroom and through the kitchen to the garage where her car was parked.

She was terrified. Her palms were sweaty around the steering wheel, and it irritated her that such a small thing as substitute teaching for middle school kids would frighten her after all she’d been through.

Her therapist would tell her all things in time. It was a mantra she’d repeated a lot over the last year. And it was true enough. Everything in good time. She just had to be patient and cut herself some slack.

Moving was a good step. A positive step in the right direction. Ethan hadn’t understood why she’d gone in such a different direction with the new house they were building. He’d thought they’d have the same house built inside the compound. The house they lived in now was one they’d chosen together and had incorporated all their favorite things.

As she backed out of the garage and stared at the house that had once been her dream, she took a deep breath. The truth was, she couldn’t wait to move away from the house that now represented some of the unhappiest moments in her life.

Her husband had once stood in the living room that she’d painstakingly designed and handed her divorce papers.

She’d never be able to settle back in and just forget that it happened.

She had a new dream now. To stop living in the past. To move forward. New house. New life. New chance to make things right and to leave the past precisely where it belonged.

Softly at Sunrise in Other Languages: