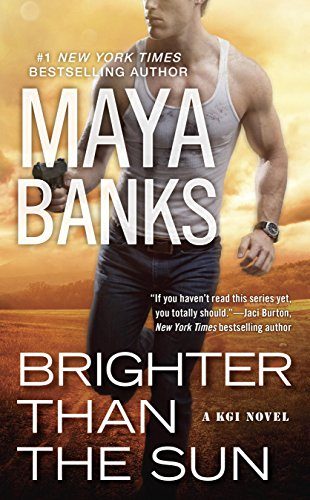 Book 11 in the KGI Series 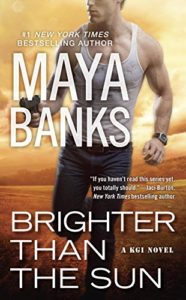 His steps were slow and measured as he drew closer, and yet she still didn’t register his presence. He frowned, because for a woman as terrified as she appeared, she was frighteningly unaware of the potential threat to her. She was too worried about the ones far enough away that she could possibly escape and was paying no attention to the fact that Joe now stood a mere foot away from her.

He cleared his throat, not wanting to startle her too badly. He instantly regretted not being more obvious in his approach. For not calling out to her when he was several feet away. Color leeched from her cheeks leaving her deathly pale and she flinched, stepping back so quickly that she nearly stepped right off the deck and into nothing but air.

Joe let out a string of curses even as he lunged to grab her arm before she plummeted to the ground below. It wasn’t a huge drop, but she was so damn tiny and fragile-looking. Such a fall could easily result in a broken bone or bones. His relief was palpable when his fingers managed to curl around her wrist and he squeezed, hating her soft cry of pain, knowing he was the cause, but no way in hell was he letting go.

He hauled her back to safety, refusing to let go until both her feet were planted on the deck once more and he had positioned himself behind her, a barrier to any chance of her taking a fall again.

She looked at him in bewilderment even as she cupped the wrist he’d manacled and rubbed as if trying to alleviate the discomfort. He frowned, hating the thought that he’d been too rough, but damn it, she could have been hurt far worse if he hadn’t caught her.

Slowly, so as not to alarm her, he reached for her wrist, and at first she resisted, her eyes going wide, but he persisted, gently tugging her it free. He turned it over to see his fingerprints red against her pale skin. Already a shadow of a bruise appeared and he cursed violently under his breath.

“I’m sorry I hurt you,” he said in a low voice even as he rubbed his thumb soothingly over the marks. “I wouldn’t hurt you for the world, Zoe, but I couldn’t let you fall.”

She blinked in surprise and then slowly relaxed, her shoulders sagging slightly, and the tension left the wrist he held so carefully.

“It’s nothing,” she said huskily. “Just caught me off guard. I didn’t even realize what I’d done. Thank you for not letting me fall.”

Joe smiled. Really smiled. He couldn’t remember the last time he’d actually smiled the way he did when looking at her. Her eyes widened a fraction as she studied his reaction and a light shiver stole over her body, chill bumps erupting beneath his fingers that still stroked her soft skin.

“You’re more than welcome. You’re safe here, Zoe. No one, especially me, will let you fall. I hope you believe that. If not, then I guess I’ll have to prove it to you.”

Her brow furrowed. “Why wouldn’t I be safe?”

“That’s a very good question,” he murmured. “Perhaps a question only you can answer.”

She frowned and withdrew her wrist from his grasp. He barely managed to suppress his protest at the sudden loss of contact.

“Have you seen Rusty?” she asked anxiously. “She’s been gone forever.”

Joe glanced around and then grimaced when he saw Rusty and Sean a distance away. Judging by Rusty’s scowl, whatever the two were discussing wasn’t pleasant.

“Uh, I think she’s pretty occupied at the moment. But I’ll stay with you, Zoe. We don’t even have to talk. I’ll just stand here until Rusty gets back. Whatever makes you comfortable.”

She didn’t immediately say no but neither did she looked thrilled over the prospect. Her gaze swept the area for about the hundredth time and she seemed relieved when she found that no one was paying her and Joe the slightest bit of attention.

“So how long do you plan to visit?” he asked, purposely guiding the conversation into neutral territory.

Or so he’d assumed.

Once more her eyes grew wary, panicked almost, and she froze, going absolutely still. So still he wasn’t sure she was even breathing. What the fuck was going on with her? And why did any question, no matter how innocuous, seem to send her into meltdown?

That conversation he planned to have with Rusty was going to happen immediately. Just as soon as he could maneuver his baby sister somewhere they wouldn’t be overheard, and then she was going to damn well spill. Everything. Because something was very wrong with this situation. A simple visit from a college friend? He nearly snorted aloud. Zoe was scared—no, she was terrified—of something or someone, and she wasn’t just staying a few days with her college friend. She was hiding, fearful of discovery at any moment and that pissed Joe off.

He wasn’t pissed at her. He was pissed at whatever or whomever had put terror in such beautiful eyes and made her jump at her own shadow. And he was going to find out the truth, the real truth, if it was the last thing he did.

“I don’t really know,” Zoe said softly. “It’s been a while since I saw Rusty. I graduated ahead of her and we were so close at school. I missed her.”

She said the last painfully. As though Rusty was her only friend and the only person who truly cared about her.

“So I was so happy to get to see her again, and when she suggested I come home with her and spend time with her so we could catch up, of course I agreed, but we really didn’t talk about a timeline. I suppose we should have.” Pain creased her forehead and her eyes became sad. “I don’t want to impose or outstay my welcome.”

“How about you and I spend the day together tomorrow,” Joe said impulsively.

Even as the words escaped he cursed his lack of control. What the fuck was he doing? Had he seriously just asked her on a date? For fuck’s sake. His first priority had to be finding out the real story and if his family was in danger because of her presence. All of which he could do just fine without going out on a fucking date with her.

But at the same time, something deep inside him seemed to settle and his initial reaction and rejection of his impulsive action subsided as peace spread through him.

She yanked her head upward to meet his gaze, her eyes rounded with shock, her mouth similarly forming a surprised O.

“I could show you some awesome places here. This part of the state is beautiful. There’s a lot to see and enjoy. Ever heard of LBL?”

Her nose wrinkled and she shook her head.

“Land between the lakes,” he explained. “It refers to a piece of land between Lake Barkley and Kentucky Lake. It’s a beautiful spot. A protected refuge for wildlife like bison and even elk. We could go swimming off my dock or just sit and dangle our feet in the water and be lazy. We have some great hole‑in‑the-wall places to eat where the food is to die for. And the scenery is absolutely beautiful.”

Shock was evident in her eyes, as well as the fear she worked so hard to hide. He didn’t have the heart to tell her that she was a complete failure at maintaining a poker face. She’d get eaten alive in a high-stakes game.

“Are you asking me out on a date?” she choked out.

Taking a chance on her not immediately withdrawing and taking the fall he’d only barely managed to avoid the last time, he reached out and curled his fingers around hers, holding on loosely so she wouldn’t feel threatened.

“I’d rather consider it taking the time to show you around the area we call home. You’ve been holed up in Ma’s house with Rusty ever since you arrived, and today is the first day you’ve actually ventured out. It’s obvious to anyone with eyeballs that you’re completely overwhelmed by my loud, raucous family. I thought it would be good for you to get away for a while. Just you and me. I promise to be a perfect gentleman.”

He flashed his most charming grin, one that had proved effective many times in the past, but apparently it was lost on her because she continued to regard him with suspicion.

“Zoe, I won’t hurt you,” he said gently. “No one here will ever hurt you. Every person here would protect you with their life.”

She nibbled nervously at her bottom lip then briefly closed her eyes. “It’s probably really stupid of me, but you know what, Joe Kelly? I think I believe you. So yes, I’d love to get a personalized tour of the area. I have been a bit stir crazy cooped up in the house since I got here. A day out sounds nice.”

He smiled then. “I’ll pick you up at eleven. If I know Ma, she’ll pack us a picnic lunch so we’ll leave early enough to find the perfect place to eat whatever she fixes us. After that? We can do as little or as much as you feel like.”

For the first time, she actually smiled in return, her eyes lighting up, the shadows that seemed so permanently ingrained lifting and fading away. He stared a long moment, at a loss for words at just how much her smile transformed her features. She wasn’t just pretty and wholesome and natural as he’d observed before. She was absolutely beautiful.

Fuck. He had a bad feeling about this. A very bad feeling that he’d just landed in the same exact position that all his other brothers had, and the hell of it was, he could no longer give them shit with a straight face, because now he understood their reactions to the women they’d laid claim to. 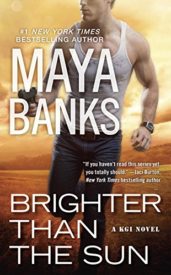 Brighter Than the Sun in Other Languages:

is Book 11 in the KGI Series