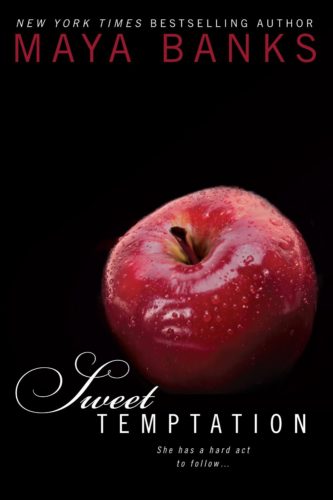 Book 4 in the Sweet Series 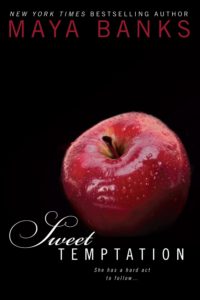 He didn’t see her right away. His view of her was obscured by the typical eclectic mix of sexcapades. Business as usual on a Saturday night at The House. The common room where people met to play and act on their fantasies was alive with the sounds and smells of sex.

His concentration left the pair when he heard the unmistakable slap of leather against skin and a breathless sound of pleasure that rose and quivered around his ears. Beckoning him.

And then he saw her. Small, curvy and striking. Her nude body glowed in the soft lighting, her skin a light creamy brown, hinting at Hispanic heritage. Her hair slid like a waterfall over her shoulders, parted down her spine by the slither of a whip as it met her flesh again.

He couldn’t see her face, and suddenly he wanted to very much. Were her eyes closed in ecstasy, her face soft and warm with pleasure?

High above her head, her hands flexed and tightened against the rope that held her wrists captive. Her skin rippled over her shoulder blades as they dipped and caused a slight hollow.  Then she relaxed again, and her low moan drifted to him once again.

Beautiful. She was fucking beautiful.

Desire whispered through his veins, gathering momentum, moving faster, surging through his groin. His dick tightened painfully, and he shifted to alleviate the uncomfortable tension.

No longer able to stand watching from afar, he moved forward, working his way through the crowd. Around the people watching the flogging. He circled so that he could see her profile.

Disappointment settled into his chest when he saw the half mask covering her eyes.

His gaze traveled over her luscious, plump lips that were perfectly bowed and untarnished by lipstick. They parted again as another sensuous gasp escaped from her throat.

He could no longer hear the slap of leather or the conversation around him. The sounds of the other occupants fell away, and all he could hear was her.

Her breasts, high and firm, smaller than he usually liked, jiggled when she endured another blow. The nipples, brown, darker than her skin, erect and puckered, soft looking . . . What would they taste like? How would they feel in his mouth? Between his fingers?

His fingers curled. He could feel the slight weight of the globes in his palms as surely as if he were standing in front of her, measuring their size with his hands.

She was a perfect hourglass, her hips slightly wider than her waist, her belly flat and drawing attention to the soft curls between her thighs. They were dark like the fall of hair spilling over her shoulders, and they shielded her femininity, revealing nothing of what lay beneath.

But he could imagine. Oh yes, he could feel her damp heat as he parted the tender folds and delved beyond the silky curls. He’d stroke a finger over her clit and then trail lower to her center, stroking in- ward, feeling the clasp of her pussy sucking him deeper.

Jesus. Sweat beaded his brow, and his cock swelled and strained against his fly.

What about her did it for him? It wasn’t as if he didn’t see women like this in The House all the time. Was it the mystery? Was it her arresting beauty? Or maybe it was the way she arched and bowed her body, seeking the kiss of the whip even as she flinched away.

She was into it in a big way. Deep. Her eyes were closed, but he was sure they were dark like the rest of her. Those sumptuous lips puckered and parted, opened and closed. She made the most delicious, arousing noises, and he wasn’t the only one affected.

Other men watched, as transfixed by the sight as Micah was. Lust blazed in their eyes. They wanted her, but so did he.

He started forward again, his entire concentration on her, on the man making her writhe beneath the whip.

Cole looked up as Micah neared, and he paused, whip held high in the air. And then as if sensing his approach, the woman turned her head and opened her eyes.

Liquid heat exploded through his body. Her eyes were so expressive, so bright with passion, and she didn’t look away once their gazes collided. He could drown in those dark pools.

Her lips trembled, and for a moment he sensed deep vulnerability, a fact that made him suddenly fiercely possessive.

No, he couldn’t look away any more than she could, and he waited for what he wanted.

Her small, pink tongue flicked out, licking over her lips in a sudden, almost nervous motion, and then she nodded, need firing in her eyes.

Cole reached out to touch her shoulder, and it was all Micah could do not to react violently. He didn’t want Cole—or anyone else—touching her. She was his for this moment.

“Are you sure?” Cole said in a low voice only she and Micah could hear.

Her gaze flickered, and she turned briefly to look at Cole. Again she nodded, and her eyes flashed as she refocused her attention on Micah.

Those lips. God, those lips. He was dying to taste them, and suddenly he knew he had to.  Even as he took the whip Cole extended and stepped forward, his movements jerky and urgent.

He cupped her jaw in one hand, slid his fingers over the softness of her cheek, then slanted his lips over hers and took them hungrily.

He swallowed her gasp. Her taste exploded onto his tongue as he swept it over her mouth, inward, stroking deep. Sweet. Warm. Soft like a woman should taste.

Her tongue met his, boldly tasting him in return. Hot and wet, they dueled, neither backing down. An electric current raced up his spine, ricocheted off the base of his skull and sizzled over his nerve endings like a bolt of lightning.

Starved for air, he yanked himself away, his breaths coming in quick, jerky pants. She stared at him in wonder and swayed against the bonds holding her hands.

He took one step back and slowly circled until he stared at the slim column of her spine.

The room quieted, and her soft cries grew louder, more frequent. Moans. Sighs. A woman on the verge of climax.

She captivated him. Mesmerized by the sight of her reacting to his whip, his touch, his command, she excited him on a primitive level. She touched him in places that hadn’t felt warmth in a long time.

He didn’t understand it, but he latched on to it like a man starving.

The whip coiled and snapped, hissing and then landing, the welt rising on her skin. She rose up on tiptoe, her body straining even as she arched her back, waiting, wanting another lash.

The last lash fell just as a cry of sweet ecstasy burst from deep inside her. The sound was primal and beautiful, and it instilled an ache in his gut that extended to his balls. He was painfully erect, his cock bulging against the zipper of his jeans. He wanted nothing more than to shove his pants down and bury his cock between her ass cheeks. He wanted her ass, her pussy, her mouth. He wanted this woman.

No longer able to keep from touching her, he ran his fingers over the thin welts crisscrossing her back. She moaned softly, leaning into his caress. He smoothed his palms up her back and then under her arms and down her sides.

Wanting to look into her eyes, to see her again, he walked around her, letting his hand trail over her skin until his fingers rested on her belly and he stood over her.

“Look at me,” he said huskily. He lifted his hand to her chin, tilted it up so her gaze met his. “You’re so beautiful.”

Her lips curved upward in a tremulous smile, and he traced the fullness of her bottom lip with his thumb. He dropped his head to hers, their mouths touching. He paused, taking it slower this time, wanting to savor her sweetness. “I want you. I want you so much it’s killing me.”

His voice was hoarse and needy, but he didn’t care. He only knew if he didn’t have this woman, he’d go crazy. He reached up to untie her hands, and when they were free, she faltered, her knees buckling. He caught her to him, her body melting into his. She felt so damn good, and his zipper was trying to brand a permanent tattoo on his dick.

Wanting to feel the silk of her hair, he dragged his hand through it, enjoying the sensation of it sliding through his fingers.

“Will you come home with me?” he murmured.

His lips were just centimeters from hers. Her breath blew over his face, and he inhaled.

She stared back at him, desire warming her eyes.

He tucked a long strand of her hair behind her ear, and his thumb snagged on the mask. He wanted to see her, wanted to know more about this woman he was determined to possess tonight.

She uttered a sharp protest and raised her hands to grip his, all the while shaking her head in mute denial. She tried to turn away, but the mask slipped and caught in her hair. A strangled sound erupted from her throat and she backed hastily away, but not before he saw her features.

Shock hit him square in the balls. He was going to be sick. Angel. David’s sister. Dear God, what had he done? She stared back at him, frozen, her eyes wide and almost frightened.

The beautiful naked woman standing in front of him was quickly replaced by images of Angelina at sixteen. Innocent, with a dazzling, flirtatious smile, the kind that a kid wore when she thought the world was hers on a silver platter. He couldn’t conjure an image of her older. She was stuck as that sixteen-year-old kid. How old was she now anyway?

Fury quickly replaced his utter disbelief. “Angelina, what the fuck?” 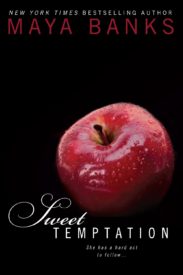 Sweet Temptation in Other Languages:

is Book 4 in the Sweet Series