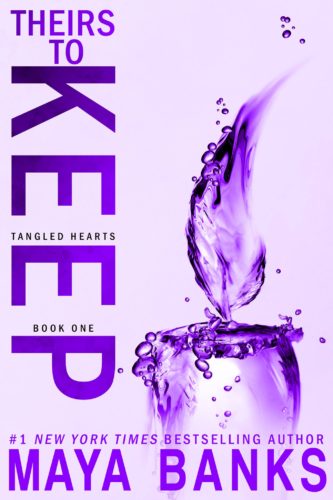 Book 1 in the Tangled Hearts Trilogy 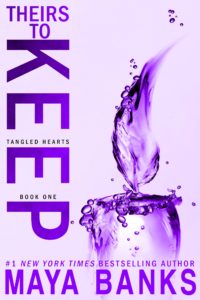 “Son of a bitch,” Cade Walker swore as he rolled out of bed. He yanked on his pants, threw on a t-shirt then made a grab for his shoulder harness that held his nine millimeter handgun.

He went to the computer monitor on his desk and punched in the codes to bring up the location of the alarm.

His bedroom door opened, letting in a flood of light. His friend and co owner in his security and surveillance business, Merrick Sullivan, stood there, dressed, his gun holstered at his side.

Merrick was one mean looking son of a bitch in daylight hours. Get him out in the middle of the night in some dark alley, and it was like looking at the grim reaper. But then he beat the shit out of people for a living as a mixed martial arts fighter and was even now training for a fight that would give him the title shot in the heavyweight division.

“You calling it in or we going to check it out?” Merrick asked.

“Fuck it, we’ll go. Last time the alarm went off there, it turned out to be a damn cat. No sense getting the boys in blue out on a night like this. They’ll be up to their ears in traffic accidents. People don’t know how to damn drive when the roads are wet.”

Hank Stevens was the owner of the gun store and a client of Cade’s and Merrick’s. Cade ran a successful security consulting business and Merrick helped out whenever he could. They installed systems and monitored them twenty-four hours a day. Which meant they could literally be called out any hour of the day, any day of the week.

The list of clients they provided personalized service to was small. Mostly they consulted, trouble shot and provided advice on a larger scale. But there were a few local businesses that they still felt loyal to. These were people that Cade and Merrick cared about and felt protective of. Hank had been a long time friend dating back before Merrick began his career as a fighter and before Cade opened his own business. The two men looked out for Hank. Owning a gun shop wasn’t always the safest business to run and they didn’t want anything to happen to the older man.

It was colder than a witch’s tit when Cade stepped from the front porch and hurried to the Hummer parked on the street. They had a garage, but it took too damn long to open and shut the garage door, and time was often valuable. Parking on the street gave them precious seconds that they weren’t backing out of the driveway.

Merrick threw open the door to the driver’s side and slid behind the wheel. Cade got in on the passenger side and not even two seconds later, Merrick roared off down the street, heading toward downtown where Hank’s shop was located.

They made it in record time even with the streets being sloppy and a damn drizzle that made it hard to see. Merrick doused the headlights when they were a block away and pulled to a stop several businesses down.

He and Cade both got out and pulled their guns.

“According to the alarm monitor, it was the alley window that was compromised,” Cade said in a low voice as the two men hurried down the sidewalk.

Merrick ducked down a sidestreet so they could access the alleyway. When they reached the end, Cade flatted himself against the wall and inched his way toward Hank’s store.

When he and Merrick were only a few feet away, Cade held up his hand and then put a finger to his lips. He concentrated intensely, straining to hear if any sounds were coming from inside.

He eased forward again when he heard nothing and then he frowned when he saw the shattered glass on the rough, cobblestone street. Glancing up, he saw where the window was busted but there was no light coming from within. No flashlights. Nothing. It was dark and silent as a ghost.

Cade switched on his flashlight and shone it downward, skimming the immediate area. He stopped the beam on a large shard of the glass and then knelt to pick it up.

He held it up to Merrick, shining the light on the blood smeared on the edge. “Looks like our perp didn’t get away unscathed.”

“Let’s check it out,” Merrick said. “Dumbass could still be in there for all we know.”

Walking into a gun store where a suspect may or may not be inside, wasn’t on Cade’s list of favorite things to do, but neither did he want an entire squadron of patrol cars to converge and shoot up Hank’s store.

Cade picked up his cell phone and punched the number and then the codes to deactivate the alarm system. Then he dug out the key to the back door and quietly inserted it into the lock.

He eased the door open, and went in, gun up, flashlight in his other hand. Merrick hurried in after him and the two flattened themselves against the wall and slid forward down the hall leading to the showroom.

When they got to the end, Merrick motioned toward the row of light switches above Cade’s shoulder. Then he held up three fingers to signal on the count of three.

Cade switched off his flashlight, stuck it back in his pocket and then reached up with his arm so he could flip all the switches at the same time.

He took a deep breath and then counted out to Merrick. “One…two…three!”

He pushed his arm up, and suddenly the entire building was awash in light. Merrick gripped his gun and made a wipe sweep of the showroom as Cade did the same, looking for any movement.

But there was none. Everything was quiet. No sudden sounds. No one startled by the light.

“Kids,” Merrick muttered. “Just a bunch of damn kids with nothing better to do on a Saturday night.”

Cade was about to agree when his gaze stopped on one of the large cabinets underneath the rifle display along the wall.

“Check it out,” he murmured, gesturing toward the smear of blood right by the handle.

Merrick frowned and then circled around, separating himself from Cade. He dipped his head to the side to signal Cade to come in from the right while he closed in from the left.

Cade crept forward until they were directly in front of the cabinet. Cade bent and touched the drop of blood on the floor. It was still warm and fresh.

Surely… Well, he wasn’t going to say surely anything, because he’d pretty much seen it all. If their intruder had heard Cade and Merrick, he very well could be hiding in the cabinet. It was large enough for a small person and if Merrick was right about it being a teenager, then it was certainly possible.

Merrick took position, pointing his gun at the door and Cade leaned away so he could open it and use the door as a shield. He hooked his fingers around the handle and then looked up at Merrick to make sure he was ready.

Merrick’s face went from pissed off to what the fuck in two seconds flat. His gun wavered and then he slowly lowered it.

Cade lurched up and pushed around, wanting to know what the hell Merrick had seen.

To his utter shock, there was a small woman curled into a ball, cowering in the cabinet. She was staring at them both with wide, frightened eyes and she was a complete mess.

“Holy shit,” Merrick breathed. “Who are you, lady and what the hell are you doing in here?”

Her entire face crumbled and tears simmered in the wide, blue eyes.

“I don’t know,” she whispered. 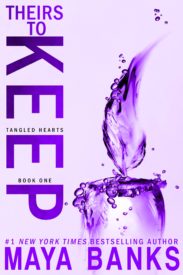 Theirs to Keep in Other Languages:

is Book 1 in the Tangled Hearts Trilogy