Also as a Digital Novella 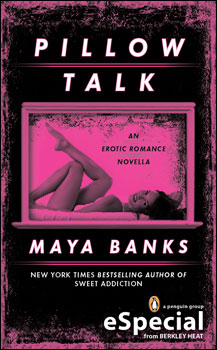 Nervous bubbles scuttled around Zoe’s belly as she checked her appearance in the dressing room mirror. She’s been careful not to use so much makeup that her identity wasn’t discernible. After all, that was the point. For everyone—especially Chase—to know who she was.

But now that it was nearly showtime and she was as scantily clad as a stripper—hello, she was a stripper for the evening!—she was having some serious cold feet. Oh not about the idea in general. She was still a big fan of knocking Chase’s socks off, but she hoped to hell she didn’t trip on stage. Or fall off it. Or that the guys didn’t laugh her into infinity.

Renting out the club hadn’t been cheap, but it beat having the entire town see her naked and gyrating.

A knock sounded on her door. “You’re up,” the manager called.

She stared back in the mirror, cinched up her top so that a little more cleavage was shoved forward, and then ran her hands over her lean belly to her hips, where the sparkly little tassels flickered in the light.

She wore only a G-string underneath and so with every movement, her ass was exposed beneath those shimmery little tassels. She wasn’t taking off more than her top. Not that she wasn’t proud of her wax job, and she knew damn well Chase loved it, but some things were too private to be flaunting. Her girly proclivities being one of them.

With a deep breath, she walked into the hallway and headed in the direction of the stage. She paused at the curtain and then nodded toward the DJ.

Chase laughed at something one of his buddies said and snagged another beer from the waitress.

“Is it me or is it dead in here tonight?” Mike asked.

“You would know,” Brody said in a dry voice. “Not all of us have lifetime memberships.”

The rest of the guys hooted in laughter and threw pretzels and nuts in Mike’s direction.

“Hey, before the show starts, I want to propose a toast to the birthday boy,” Tate announced.

He stood and made a show of clearing his throat.

Tate grinned, then tipped his beer in Chase’s direction. “May this birthday be the best ever.”

The others raised their bottles in response, and Chase’s ears were drowned in a chorus of Happy Birthdays.

He raised his beer good-naturedly as he stared at the dozen friends gathered. They’d think he was a pussy if they knew what he was really thinking. If Zoe hadn’t had to work, they could have spent a quiet night at home.

They would have watched a movie while he played with her neck. She would have been so hot by the end she would have jumped his bones there on the couch, and then they would have retired to the bedroom and made love the entire night.

Yeah, he was keeping that thought under his hat. The guys would never let him live that one down.

The lights dimmed and the spotlight hit the stage. Whoops filled the air as everyone focused their attention on the small stage. The music began, a frantic, high-tech bumping and thumping.

Then the curtains flew open and there she was. His supposed birthday present.

The guys surged to their feet as she strutted forward in a pair of heels that were designed to make a man drool. Chase followed the line of her legs up to an ass that jiggled with every step.

Hell, he might be attached but he wasn’t dead. She had an ass to die for.

She turned around, sticking that ass out, and began to shake it in time with the music. Around him the air exploded in whistles and catcalls.

She undulated, working herself back to a fully upright position. The light wasn’t on her face, but then who came to this kind of place to look at a chick’s face?

When her hands hovered teasingly at the clasp of her top, the roar got louder.

Strangely, Tate and Brody stood back, their arms crossed, and they had peculiar expressions on their faces. Brody took a swig of beer and then drained the entire bottle as if he needed fortification.

He’d have to give them both shit later because it looked like they were wary as hell to see the lady in question disrobe.

She strutted to the very end of the catwalk until she stood directly in front of the group of men. Then her top flew open, and her breasts bounced free.

Chase nearly swallowed the tip of his beer bottle and put it down before he embarrassed himself. Brody and Tate looked strangled, and both reached for another beer simultaneously. The other guys pushed forward, crowding the stage.

Then the light flooded her entire body, and Chase forgot to breathe. Hell, it felt like someone had kicked him right in the balls.

She smiled a sexy, disarming smile and pointed directly at Chase. Then she crooked her finger in a come-hither motion about the time the other guys recognized her.

At first there was deafening silence that was obvious even above the din of the music. Then a chorus of “Holy shit!” went up.

Chase was paralyzed at first. This was his fantasy. She was playing out his fantasy. He caught a flash of uncertainty in her eyes, and he knew he had to act fast or this was going to be a disaster.

With a broad grin, he shoved his way through the crowd of guys and came to a stop in front of her. He looked up at her with an arched eyebrow.

“Are you my birthday present, sugar?”

A slow sultry smile lit up her entire face. She bent down until her breasts swayed precariously close to his mouth, and she kissed him just once.

“Just sit back, cowboy, and enjoy the show.”

She straightened and the music changed to a slower, more seductive beat. Her gaze never leaving him, she began to dance, her body writhing in time to the music.

Around him, the guys stared up at her in awe. They looked back and forth between her and Chase as if they couldn’t quite believe what was going on.

Then he saw the jealousy and the lust in their eyes. It hit him with more power than he’d ever imagined in his fantasy. This was his girl on stage, giving him the performance of a lifetime, and his friends were watching, envying him with their every breath.

He glanced back at Brody and Tate and realized then that they must have been in on it. It explained their unease. He almost laughed. They looked a little green, and every time one of the guys yelled something to Zoe or made a motion like he wanted to touch, he thought they were going to resort to violence.

But he saw something else in their eyes. Something they probably didn’t want anyone to see. He saw desire and yearning.

“Goddamn it, Chase, you are the luckiest son of a bitch,” Mike said over the music. “I’ve never had a girlfriend willing to do this for my birthday.”

His statement was met by a round of guffaws.

“You don’t keep a girl long enough to be called your girlfriend,” A. J. said with a snort. “Taking them to bed, then sending them on their way doesn’t a relationship make.”

“Fuck you, Spinelli,” Mike said rudely. But he grinned in acknowledgment even as he flipped A.J. off.

The rest of the firemen crowded round and finally it was too much for Brody and Tate. They pushed to the front and glared at their fellow firefighters.

“You don’t touch and you better damn well be respectful,” Brody growled.

Chase chuckled and looked back up to see Zoe lower herself to her knees in front of him. She crawled to the edge where he stood, reached for his shirt and pulled him roughly to meet her lips.